1. Kansas City Chiefs: OT Luke Joeckel: With Alex Smith expected to be traded to Kansas City, the Chiefs no longer need to draft Geno Smith in order to fill the gap at quarterback. New head coach Andy Reid has said he will draft the best player on the board, which is why Luke Joeckel will be selected first overall in the 2013 NFL Draft.

2. Jacksonville Jaguars: DE Bjoern Warner: Jacksonville's new logo may be the start of a brand new franchise, so drafting Bjoern Warner has the potential to solve the problem on defense. The Jaguars ranked dead last in sacks last season, allowing the opposing team's quarterback to feel comfortable in the pocket. Jacksonville has many other options at defensive end, but Warner is capable of fixing the problem long term.

3. Oakland Raiders: QB Geno Smith: Even though Carson Palmer had a successful 2012 season statistically, the Oakland Raiders appear to be interested in drafting Geno Smith. Originally, Smith was the favorite to be drafted first overall, but now that Kansas City is in the process of acquiring Alex Smith, Geno will fall to number 3 in the draft. 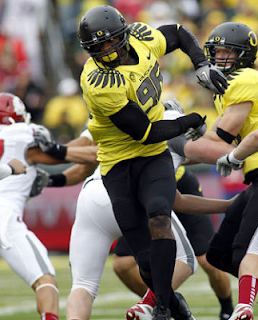 4. Philadelphia Eagles: OLB Dion Jordan: At 6'6" and 250 pounds, Jordan has extraordinary speed that will improve Philadelphia's sack problem. The Eagles ranked 25th overall in terms of sacks, and former Oregon head coach Chip Kelly would be more than thrilled to draft one of his former players.

5. Detroit Lions: CB Dee Milliner: Milliner's incredible 40 yard dash time of 4.37 seconds has increased his draft stock exponentially. Detroit is in desperate need of a shut down corner if the Lions lose Chris Houston and Jacob Lacey via free agency.

6. Cleveland Browns: DE Barkevious Mingo: A corner back would be nice at the sixth spot in the draft, but because we expect Milliner to be drafted by Detroit, the Browns may have to settle with a defensive end. Barkevious Mingo, unlike DE Demontre Moore, maintained his high draft stock after a good showing at the combine. The better move for Cleveland would be to trade down and wait for a draft class with more depth, but if they were to keep their sixth overall pick, Cleveland will draft Mingo in order to improve their mediocre defense.

7. Arizona Cardinals: QB Matt Barkley: Offensive lineman Eric Fisher appears to be the more appropriate pick for Arizona, but many experts believe the Cardinals will take Matt Barkley in the first round. Barkley did not play any games toward the end of the 2012 season at USC due to an injury. This same injury kept him from participating the 2013 NFL combine. Even then, Arizona likes their chances with Barkley as their new quarterback in September.

8. Buffalo Bills: WR Cordarelle Patterson: Patterson is one of the most talented offensive players in this year's draft class. At 6'2", the former Tennessee Volunteer resembles NFL star wide receiver Julio Jones, with size, speed, and spectacular hands. Whomever the Bills select at quarterback (via free agency or draft), he will have a second option apart from Stevie Johnson.

9. New York Jets: OLB Ezekiel Ansah: Historically, Rex Ryan loves those players who dumbfounded scouts at the NFL combine. Last weekend, Ezekiel Ansah ran the 40 yard dash in 4.60 seconds. Considering the BYU linebacker is 6'5" and 270 pounds, his insane athleticism is bound to catch the eye of Rex Ryan, whose New York Jets could use an upgrade on the defensive side of the ball.

10. Tennessee Titans: OG Chance Warmack: While at Alabama, Chance Warmack successfully cleared the lane for running backs Mark Ingram, Trent Richardson, and Eddie Lacey. Warmack's size can overpower most defensive ends, and the Titans will look to rush their star running back Chris Johnson a lot more in 2013.
Posted by Unknown at 2:39 PM

How many years will it take for the Cleveland Cavaliers to win a title?

Which rookie will have the best NFL career?