(1) Colin Kaepernick over (8) A.J. Green: As a number one seed, Kaepernick will have to watch out for the upset against A.J. Green. The San Francisco quarterback led his team to a Super Bowl, but the road to the cover may be a bit more difficult.

(4) Arian Foster over (5) Julio Jones: Arian Foster's impressive statistics in 2012 were overshadowed by Adrian Peterson and his quest for 2,000 rushing yards. Foster won 88% of the voting in the first round, and though Jones will likely put up a fight, Foster will be one step closer towards the Madden 25 cover. 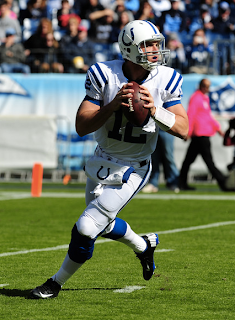 (3) Russell Wilson over (6) Von Miller: While Von Miller wheezed into the second round, Russell Wilson easily beat Justin Blackmon in the first. Wilson did not win Offensive Rookie of the Year in 2012, but his Seahawks have one of the most reliable fan bases in the league. Wilson is guaranteed to beat Miller.

(2) Andrew Luck over (10) Clay Mathews: Green Bay Packers fans were well represented in the voting when Mathews upset Trent Richardson in the first round. His next opponent, Andrew Luck, revived a struggling Indianapolis franchise last season, and his accomplishments did not go unnoticed.

(5) Ray Rice over (4) Dez Bryant: Flacco was credited with the majority of Baltimore's post season success, but Ray Rice guided this team into the playoffs. His opponent, Dez Bryant, did not become hot until the final few weeks of the regular season. Rice's tremendous performance in the first round of voting will continue into the second.

(3) Rob Gronkowski over (11) Darrelle Revis: Both competitors missed a significant amount of games in 2012 due to injury, but somehow, they find themselves in a second round match up. Gronkowski appears to be a fan favorite, and will likely beat Revis in a lopsided victory.

(2) Adrian Peterson over (10) LeSean McCoy: Out of all the players competing in the 'New School' bracket, reigning MVP Adrian Peterson is the favorite to come out as champion. McCoy's 2012 campaign was not strong enough to dethrone Peterson's monster season.
Posted by Unknown at 8:23 PM

How many years will it take for the Cleveland Cavaliers to win a title?

Which rookie will have the best NFL career?